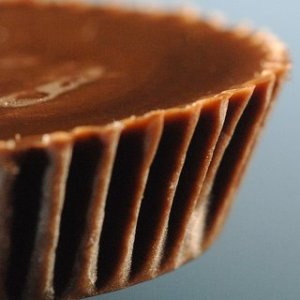 Yesterday I worked at the dojo, came home, ate ramen, biked to and taught at the park, biked home, jumped in the shower and immediately had a hankering for a Reeses peanut butter cup. I’ve been craving those recently, so I bought some at the store. But there I was, trapped in the shower, picturing them trapped in my kitchen cabinet, both of us yearning for the other.

So naturally I whined until Boyfriend came in to see what all the fuss was about. I asked him to get me a Reeses, and he shot me one of those, “C’mon… seriously?” looks. I gave him my best adorably huge smile. He rolled his eyes and headed for the kitchen. I lathered up my hair, and a short while later, Boyfriend came back with a “Look what IIIIIII goooooot!” Was it a Reeses? No. It was a cat. My neighbor’s cat. And it was not happy about being in the bathroom. Her pupils were huge. She looked like she was going to shed all her hair at once at the stress of being kidnapped by a strange man and taken into a hot, steamy room, only to encounter a dripping wet lady who then laughed, then stupidly reached out to pet her. She squirmed until my boyfriend, who was having already trouble hanging on to her, took off running out of the bathroom to let her back onto the patio, and get me my damn peanut butter cup.

He came back and reluctantly fed it to me, all the while saying, “I gotta go, I’m IMing someone about work!” I giggled and took another bite while he tried to shove the rest of it into my mouth.

We ate at Johnny Rockets while our friends (who apparently have horrible taste in restaurants) ate at Kabuki before we met at the theater upstairs to see the seventh Harry Potter movie (part I). Super depressing, but good. I need a wand.