Going to an all-girls’ middle school and high school skews one’s perspective of the world, and in so doing, failed in small part to prepare me for the very different social dynamics of a not-all-female environment.  There were about 500 people in my high school, only 112 in my graduating class, and we all more or less knew each other.  I had become so accustomed to being around nothing but social, friendly females that I assumed I could do what I did in high school (be friendly) and get the same result (friendship).  Not so.  I walked into my first college class, sat next to a female student and immediately introduced myself and started up a friendly conversation.  She was shocked into near-silence, and I was shocked by her shock.  We created a shock-echo that sounds like nothing and vibrates at a frequency between awkward and stage-fright.

I encountered another social speed-bump when sharing a suite of four bedrooms with seven other women in my freshman dorm.  One of them called out to me with a question, and I came out of my room with tampon in hand, joined them in the living room and started chatting.  A few sets of eyes kept darting to my hand.  ‘What are they looking at?’ I thought.  Not one to allow the elephant in the room to go unmentioned, I ended a sentence with, “Dah-ling,” and pantomimed smoking my tampon like a 1950’s Hollywood starlet.  A couple eyebrows shot up.  ‘Why aren’t they laughing?’ I thought.  I had found a point of cultural disconnect that I never knew existed between white, female Americans of the same age on a topic we all shared.  Initiate shock-echo.

In high school, I went through a rapid shift of hiding tampons when I went to the bathroom to tossing them into the air for fun while I waited outside for a stall to open up.  I give credit to the healthy self image the school managed to help instill in me as a female while still teaching Catholic values (quite a balancing act), and to my parents.  The first day of my first menstruation, my parents congratulated me.  My mom gave me a pad, then told my dad, who came rushing into my room and literally said, “Congratulations, sweetie!” before pulling me into a bear hug.  It was a healthy environment for a young woman, which did nothing to prepare me for the shame and secrecy I would be expected to keep surrounding my menstrual cycle in the future. 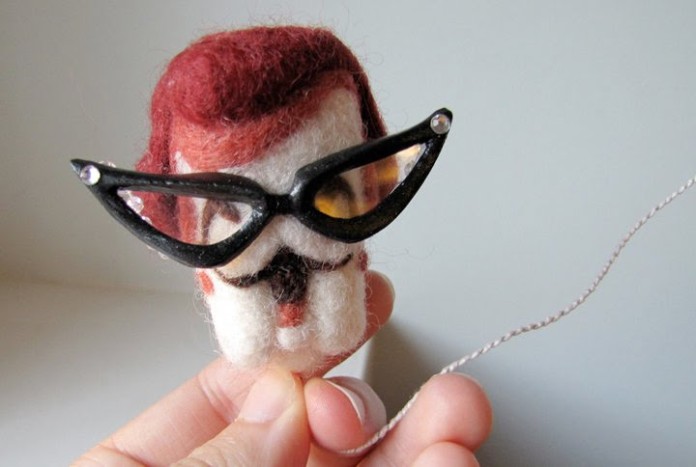 I work in an office now, and I wonder where the line is for unprofessional behavior when I comes to dealing with natural bodily functions.  Is walking to the bathroom with a tampon in hand unprofessional?  My knee-jerk reflex says yes, but why?  Is it any less professional than carrying a box of tissues around if you’re sick?  Using a tampon is evidence of health and fertility, while being sick is proof of a weak immune system, and a threat to the health of everyone in a twenty-foot radius.  We should be more offended by the sickly than the fertile, given that menstruation isn’t a catching illness, and yet the male (and sometimes female) population occasionally reacts like I’m walking through the halls of my office holding a grenade instead of thanking me for doing what must be done to keep myself from bleeding all over everything for days at a time.  YOU’RE WELCOME, PEOPLE.

This needs to stop.  There’s no reason for me to feel ashamed of my ability to menstruate.  I’m capable of building an entire person.  That’s AMAZING.  I should get high-fives on my way to the bathroom, not shunned and encouraged to keep what is essentially a super-power in the down-low.  I’ve never understood the culture of shame that surrounds menstruation.  So I’m done hiding my tampons at work.  Anyone so horrified by the blatant display of my (and by extension, half of the human population’s) desire to keep blood stains out of the office chairs is welcome to explain themselves.  Starting now.

I was starving after shinkendo class last week, and popped over to the bakery across the street (Cafe Dulce I think) to see if they had anything to munch on while I walked to my car.

It’s the white, fluffy kind of bun, and it’s full of chicken curry.  WTF have I been doing with my life up to this point?!  I need to learn how to make these.

Bonus:  They come in a hilarious little paper wrapper/pocket if you tell the cashier you want to eat them right now because they’re so damn good.

she’s almost as excited as I am

I’m a huge fan on tonkatsu with curry, especially at Misasa in Mitsuwa on the Westside.  So good.  Santouka used to be my favorite ramen place, but I think that has shifted to places with richer broth, and less dough-y noodles (and better menma), although their chashu remains some of the best out there (if a little fatty).

Boyfriend and I noticed some volunteer calla lilies growing on the other side of the gate in the back yard a few weeks ago.  They were just spectacular and seemed to light up from the inside, glowing brilliant yellow when the sun hit them in the afternoon.  They’ve died back now, but I hope to see them again. 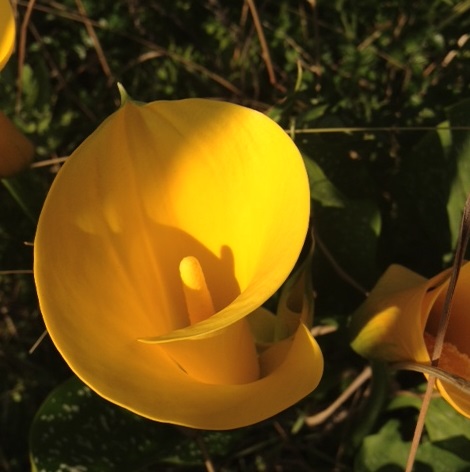 lilies are the best

During our last inspection, Dad and I noticed a ton of capped (and uncapped) brood, but the caps were different colors.  I drew this little diagram (MS Paint, bitches!) but waited to post it until we could verify the info as correct.

this is from a few weeks ago. it was a very educational inspection

The past couple of days, Dad has seen groups of bees hovering around the entrance and flying around the hive, seemingly at random.  His guess is that they’re new foragers doing an orientation flight, and I think he’s right.  They haven’t swarmed, and have built a completely new strip of comb.  They were coming back with giant, white-ish pollen baskets, so they all seem to be foraging in the same area, and are clearly happy staying at the hive if they’re bringing back so much food.  All awesome!

I’ve been reading comics since I was a kid, and there are loads of characters I’d like to get to know that I’ve never given enough time to: Green Lantern, Usagi Yojimbo, Deadpool, Cloak and Dagger, etc.  Daredevil was on that list until I bought Daredevil: Yellow a few years back.  I love Jeph Loeb and Tim Sale, they’re a great team so I gave it a shot and was very pleased with what they produced.

But there was one thing that bothered me: Daredevil is drawn in the same weird mid-swing pose ten times.  TEN TIMES.  It’s not flattering.  It’s awkward and distracting.  Did they not do enough studies of the various poses a human body can make in mid-air?  So weird.

This was my good deed for the day last week.  Some high-schooler on my feed (daughter of one of my parents’ work friends I think?) posted this, and I just had to respond (with humor, because anything else is met with defensive lashing-out).

Meahwhile, wtf, who writes this stuff?  Do people think these things just get pooped out of Jesus’ butt and get flushed straight into Facebook?

also, god hates when you humblebrag all over twitter.

Objectively, this is an elegant equation: Religious + Facebook capable = particularly exploitable.  Therefore, religious chain letters that claim that all who read it “are being tested” is a perfect concoction for mindless reposting.  Those crazy enough to think that the creator of the universe is watching whether they’re gullible enough to repost anything that implies they might be punished if they don’t will repost.  Those who realize that the person who created said chain letter couldn’t possibly know whether it’s an officially god-sanctioned test (y’know, like Abraham almost killing his son) won’t.  If this had a Pepsi label in it, it would be a genius viral marketing tool.

I burst out laughing at this last week.  It’s so hilariously honest.  I love my bees, but people tend to turn a blind eye to where their food comes from.  Let’s take a nice, close look, shall we? 🙂 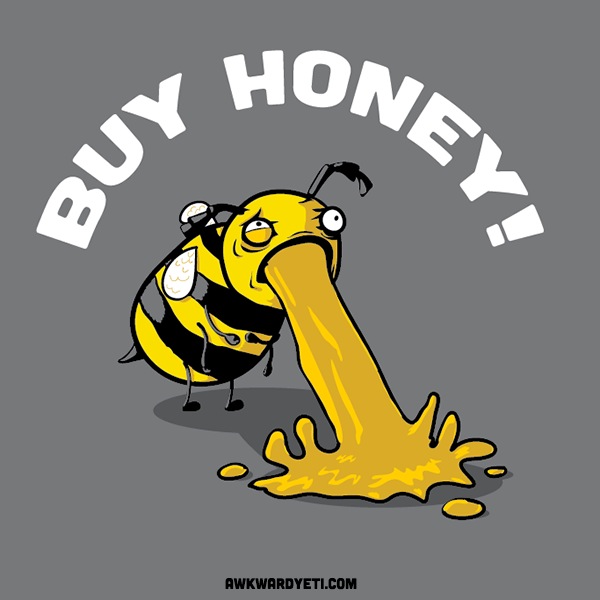 Still pretty excited about the death of DOMA.  Plus, this announcement that Californians don’t have to wait the usual 25 days after a Ninth Circuit Court ruling to exercise their right to marry.  In fact, the LA Times reports that ” Los Angeles County and some local cities are offering special procedures and extended hours Monday to meet heavy demand” for marriage licenses.

we need more of these

I’m not sure how to express my excitement over this, since it is, at its core, a depressing statement of my country’s lack of empathy for one another.  We’re all pretty excited, but what should I say to a gay/lesbian couple?  “Congratulations!  You are now considered human in the eyes of the law!”  I’m desperate to find a way to let the LGBT community know that they have support in the straight community, but Facebook status updates and an equality magnet on my car aren’t enough.

I’m volunteering at an ESL (English as a Second Language) school four days a week for a few hours per day, and try to make time for a ‘free question time’ before we start class.  I try to encourage the students to ask about language, news topics, anything really, and that day one of the students asked about DOMA.  I explained the ruling, the structure of the supreme court and the history of prop 8.  I gave no indication of my personal opinion about the ruling, but finished with a quick mention of why it’s good for California economically: more weddings = more money for the state!  The students didn’t offer their opinions, even when I asked if anyone wanted to contribute anything before we moved on.  But many of the students are religious (Christian), so I felt I could assume that many of them would be displeased with the ruling and didn’t want to start the day by highlighting something about the US they might not like, especially given the depressing nature of that day’s topic (funerals).  Still, I tried to leave them with a positive impression of the ruling without imposing my opinion on them (which would be an abuse of my power as an instructor).

My coworkers joked last week that in two years, the divorce rate will jump, given that there are probably plenty of couples getting married because they finally can (again), and are trying to be legally joined before their right to do so is revoked (again).  But I’m too happy to worry about that, so here are some of my favorite pro-marriage equality images that have been floating around the interwebz: 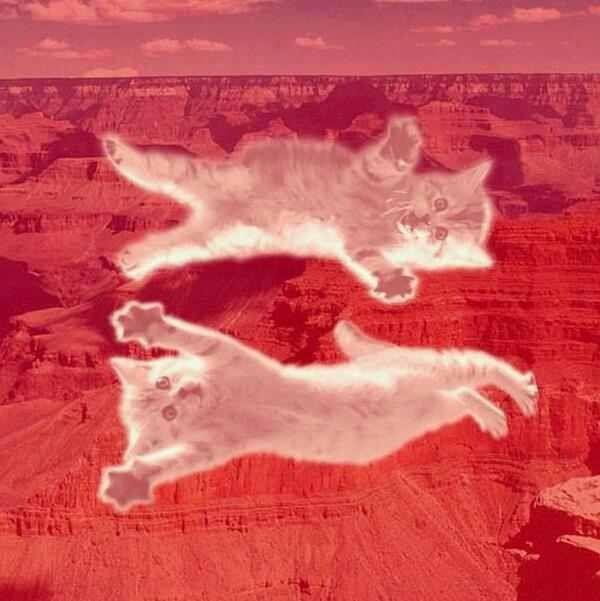 cats: official mascot of the internet.