This year’s ComiCon was my third overall, and my first as a member of the press (which didn’t make much of a difference, actually). I crashed in a hotel closet the first night, and shared a bed with a very nice lady comedian the second night. Saturday morning, she and I went to a nearby restaurant (and I use the term loosely) for breakfast. It was like being in a third-world country: everything was brightly painted to cover rust, nothing matched, there were album covers and instruments covering nearly every surface, and there were several full-sized painted figures of various celebrities scattered around (Elvis made me jump as I turned a corner). The owner was a character; I’m definitely going back my next trip.

My goal for this year’s ComiCon was to take photos of as many cosplayers as I could stand. 200 photos later, mission a-fracking-ccomplished. I also got to interview a bunch of them on camera for Comics on Comics. Those interviews should be up on their website soon. So much fun! Some of them just loved to tell us about their costume, others were so shy I couldn’t get more than a word or two out of them (so cute!).

My celebrity encounter
I got to meet Richard Taylor, who is bar-none the kindest, most generous and engaging semi-celebrity I will probably ever have the pleasure of encountering. He’s the head of the Weta Workshop which did all the props for The Lord of the Rings movies. He was just standing on the floor near the Dark Horse booth chatting with whomever was waiting patiently for their turn. He turned the conversation to my friends and I as soon as we were introduced, asking us where we were from, how do we like the con, do we work in the industry, etc. I couldn’t get over what a nice guy he was. Color me impressed.
I also got to meet Scott Kurtz who creates PvP Online, an online comic I’ve been reading for years. He was very low key, and happy to chat a bit.

A few things I’ve learned about cosplaying this year:
-It pays to have a comfortable costume (especially shoes).
-Earn the Roadblock achievement- A true sign of an amazing costume (or a skimpy one) is when one person can cause a traffic jam in the main hall while everyone stops to get a photo.
-Be a good sport- A great costume will make you a celebrity for a day. The first time some random stranger asked for my photo, I got pretty excited (my costume was very accurate, but pretty simple). The only exception to this rule came when I spotted a girl with a fantastic Scout costume from Team Fortress. I asked for a photo and she immediately froze, then took off waving her bat over her head as she went. I was in shock. AWESOME.

-Plan ahead- Every decent costume requires a good amount of planning, so you have to start months before the con to make sure you have everything you need. Some assembly will always be required.
-Just smile- I was pleased to rediscover that true cosplayers are not attention whores. They dress up because they love a character, not because they want people begging for a photo-op. Speaking of which…
-DO YOUR RESEARCH- If you’re going to dress up as a character, you’d better believe there will be people at the con who want to see that trademark move, or hear that catchphrase your character is always saying. If you can’t deliver, get ready for some seriously disappointed nerds. I photographed a woman dressed as the White Queen. Her costume was fantastic, so I asked which comic she got her inspiration from (Uncanny, Astonishing, etc). She had no idea what I was talking about. So disappointing. Would it have killed her to read up on her character on Wikipedia before the con? Visually, she was perfect for the role of Emma Frost, but she knew nothing about the X-Men universe. Which brings us to our next topic…
-Dress to your body type- How many fat, out of shape jedi did I see in San Diego this weekend, LOL! I didn’t see any Man-Faye (thank god), but if you’re gonna wear something tight, your options are to either get a gym membership months and months before the con, or dress up as a fat character. Really!
-Go all the way!- I saw so many people there with pieces of a costume on (wearing a Master Chief helmet ONLY is not a costume!). Don’t be scared, guys. If there’s any place where people will accept you in your bizzarre outfit, it’s ComiCon. Which brings us to…
-Do it or don’t- For everyone who bought their costume at Hot Topic, you’re taking up space at the con that could be filled by legitimate nerds. Buying Emily the Strange comics does not make you a comic book nerd. Just set your DVR to record Fringe, re-read the Twilight saga with your cat, and give your passes to real fans. 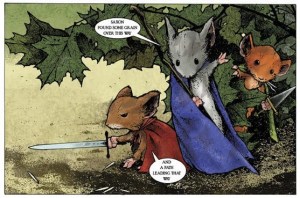 I got two of the Mouseguard books which I’ve been meaning to check out. At the Darkhorse booth I got Beasts of Burden, which is great so far. I also picked up Batman Grendel for $6. I grabbed a Wolverine sketch for my roommate (he’s her favorite), and a couple prints for myself.

The final hilight
Saturday night before I left, some friends and I went to an Italian restaurant called Acqua al 2. A few of us had a fillet mignon with a blueberry reduction sauce (see the Fileno al Mirtilio on the menu). It was like eating a meat pancake. So unusual and very tasty. The perfect end to an exhausting weekend.

P.S. My costume was a huge success! I got every aspect just right, and enough people recognized me to make me satisfied that I did a good job on it. Yuri Sakazaki, you’re my hero.

I recently finished the first volume of Lone Wolf and Cub, a manga about a rogue samurai and his infant son, who, against great peril, travel the countryside murdering the shit out of people for a large fee. It’s pretty friggin’ sweet. The main character uses his son as part of his often intricate strategies to assassinate his targets. And the son seems semi-aware of the danger. Their bond is hard to describe, pretty bizarre, and totally, ruthlessly, brutally awesome.

But who knew that there was a 6-disc TV series created in 1974? Apparently this series was first published in 1970 in Japan, where it was HUGELY popular. The original publishing company, First Comics, folded, and Dark Horse, bless them, re-published the entire series (even the last issues that were unpublished by First Comics).

So I’m hooked. But why isn’t there a collection of this somewhere? I need a Hellboy: Library Edition-style publication of this series. Am I really going to have to buy all 28 tiny little books? Yes. Will I? Probably. I’m going to get through at least the first four, and go from there. Wish me luck, oh people of the internet (none of whom read my secret blog)!

Domo is the best at everything. Kids trust him, animals love him. He’s simply the greatest. I love Domo.

I just want to take a moment to express my appreciation for online comics. I’ve recently burned through years and years of backlogged comics like PvP in a matter of days. Here’s my favorites list:

Penny Arcade doesn’t make the list because the majority of their humor is based on very specific gamer experiences, most of which I don’t share with the writers. I love Lookouts and Automata, and Twisp and Catsby are cute, but everything else is pretty much over my head. And I can’t stand people who idolize the writers (aka, my ex; get over it, they’re just some dudes who like games). The same goes for xkcd. I’m not in the math nerd circle, so I don’t understand a good amount of the material, and the stuff I do get isn’t very funny. So if you’re reading this blog, don’t tell me how awesome xkcd is. It’s not.
Regardless, the comics on my list are great.

EDIT:
This is part of why I love online comics so much. You can get to know the creators, and every strip starts to feel like an inside joke with a long-distance friend you met that one summer at camp. This particular post made me cry, but you get the idea.

I’m such a huge fan of Hellboy. From the first time I saw the art, I was completely hooked. Mike Mignola’s style is so distinctive, so grounded, so deceptively simple; there’s always something new to discover from each frame. Hellboy is so damaged, so doomed, and so funny. He kinda reminds me of my uncles. I wish he was my uncle.
I found this desktop art on the Dark Horse website. I like to imagine he’s thinking about some task he’s not looking forward to much. It’s classic Hellboy; he’s all fucked up, there’s some ancient history in the background, and we never really get the full story of the evil he’s trying to stop before he kills it, because frankly, he’s tired of that shit, he’s heard it all and no matter what it’s about to say, he just doesn’t give a damn. He’s thinking, “Just die already, you bastard.”
I would love, and you can quote me on that, LOVE, to get the rest of the library editions of the Hellboy series. *sigh* Someday…

I think I figured out who I’m gonna cosplay as at this year’s ComiCon: Yuri Sakazaki from King of Fighting!

I feel like a phony dressing up a character I currently know nothing about, but she’s the only one who has a do-able outfit, and doesn’t dress like a whore or have crazy-colored hair. My hair’s too short for the super-long braid, but maybe I can find a clip-on one or something between then and now. I already got the gi top, I already have the belt. All I need now is some purplish-blue leggings and some red Converse (already ordered: Chuck Taylor X-Hi), and I’ll be good to go!