I can’t believe it never occurred to me to write about my neighbors.  I’ve never really had any crazy neighbors.  Shitty landlords, yes.  Crazy landladies, yes.  But my neighbors have always been, for the most part, quiet, normal people.  The people who currently live directly adjacent to me are all weird in totally obvious, potentially explosive ways.

I live at the end of a hallway, so I only have three neighbors with whom I have any kind of interaction: across the hall, next door, and directly above me.  Let’s get started with…

Neighbor Across the Hall

The woman who lives across the hall from me is definitely a hooker.  She’s super nice, and has lots of male suitors.  I once came into the building to discover a man standing awkwardly at her door, gift in hand.  His head snapped toward me when I came into view, sporting a perfect deer-in-the-headlights expression.  I smiled and said hi, then tried to get into my apartment as quickly as possible.  Just as I was about to step out of the hall, her door opened, and, being the woman she is, instead of rushing him into the apartment and ignoring me, she sang out her usual, “Hey gurrrrl!  How are youuuu?”  I turned around to find her in a somewhat see-through teddy with matching fuzzy slip-on heels.  We chatted right in front of her John for a minute before I slipped inside.  The woman has serious… what’s the female version of balls?

Her apartment is on the tacky side, but it’s fucking decked out.  When I complimented her huge flatscreen TV, she said, “My boyfriend gave that to me.”  Her bedroom is covered in deep reds, leopard print duvets, and a giant gold-framed mirror covers the entire wall next to the bed.  Scented candles and small glass bottles of perfumes cover every counter top.  She breeds the fluffiest, friendliest, most talkative Siamese cats I have ever had the pleasure of meeting.  The kittens occasionally find their way onto our balcony, where they pass out and act cute (and get harassed lovingly by Boyfriend, who never had a pet growing up so he’s pretty taken with them).  She’s had a ton of plastic surgery, which includes enormous breasts, a tight face and puffy lips.  But she is by far the friendliest neighbor we have.  When we moved in, she offered to loan us her spare furniture (which we took her up on), brought us food, and invited us over all the time.  I don’t really know what to make of her, but she’s always been nice to us, and seems to run a pretty tight ship, so all I can say is thank you, Hooker Neighbor, for being so nice all the time.

The guy who lives one door down the hall from me has a balcony that covers almost the whole side of the building, and inexplicably stretches past my bedroom window.  He could look right into my bedroom while smoking a cigar on the comfort of his patio.  The annoying bit is where he leaves his patio sliding glass door open and watches movies at full volume at all hours.  The sound bounces off the apartment next door, and into my bedroom (in addition to passing through the paper-thin wall our apartments share).  These must be pretty fucking funny movies too, because his laughter pierces the night occasionally, snapping me out of my simmering rage into a sharp fury, which is usually when I call the non-emergency LAPD line to make a noise complaint.

Once during the winter Olympics he had a party going until around 2am.  When I went over to ask him to quiet down, he said, “Sorry, sorry, our friend just won a ski thing, it’s very exciting!  You want some vodka?  We have so much!”  Ok, I thought, that’s a legitimate reason to celebrate.  Then the cops showed up to shut that shit it down.

He works in real-estate, so he’s constantly yelling into his phone about one emergency or another with clients who live halfway around the world.  Oh, did I not mention he’s Russian?  Yeah, he’s Russian.  So when I went over there to ask him to quiet down around midnight on a Wednesday, he apologized and explained that the people he’s talking to just woke up!  How quirky!  Have fun with that!  Quietly!

He also has had several loud fights with his wife.  When it gets really bad, the cops show up.  I can’t understand anything they say, because he always yells in Russian, which makes it scarier.  So when he offers me vodka, I decline, and tell him to quiet the fuck down.

This past week has not been good for my relationship with Russian Neighbor.  He was unreasonably loud around midnight on a weeknight (again), so I called management to quiet him down.  It worked.  The next night around 1:30am, he slammed the metal door to his balcony directly in front of my bedroom window three times over the course of about fifteen minutes.  The third time, I got up, booted up my compy, and email management who FINALLY gave him a verbal and written official first warning.  FINALLY.

Neighbor Directly Above Me 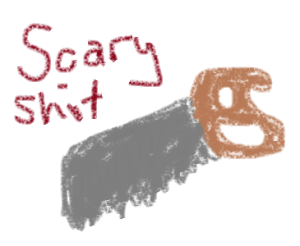 My favorite part about the guy who lives above me also happens to be the part that makes me a bit frightened of him: he’s very mysterious.  No one seems to know much about him.  In fact, I was so intrigued by him that when I saw a package on top of the mailbox with his apartment number on it, I snatched up the chance to interact with him and delivered it to his apartment myself.  The following interaction is exactly how I expect a serial killer to address me.  I knocked on the door, and he opened it about four inches.

Me: Hi there!  I live in the apartment below you.  I saw this package on top of the mail box when I was grabbing my mail.

Him: [squirly eyes]  Yeah, thanks.  [takes package, opens the door just enough to bring it inside and starts to close the door]

Him: Yeah, I used to build things.

According to the sounds that get drilled through his floor, we’ve gathered that he’s building something using wood, and power tools.  We can occasionally hear him using a hand saw (not a table saw, not an electric saw, the traditional kind) and hammer.  Once in a while, he’ll roll something that sounds like a giant wooden gear across the floor, making a very distinctive knocking sound across our ceiling.  I picture him building coffins.

So here’s the breakdown:

Hooker Neighbor: B+ Minus a full grade for whoring, but a + for being cool about it, and not bringing around a bunch of crackheads.

Russian Neighbor: C- Minus one full grade for domestic abuse, and another for keeping me awake all the time, plus a – for being a non-exotic kind of foreigner (Communism is so 1991).

Psycho Neighbor: B- Minus a full grade for being creepy, and a – for not telling us what he’s up to.

2 thoughts on “My building is full of communist psycho hookers”