I don’t often post my political views since I know what they are, and this is meant to be a journal of sorts to help me remember my life as it is today.  I guess I just assume I’ll always feel the way I do about important issues.  Then again, I used to be anti-death penalty.  So I suppose things change.

New York legalized same-sex marriage recently, and people are pretty excited about it.  California must be next.  We’re so close.  The opposition seems hateful, afraid, and for the most part, incapable of logically explaining why they believe the gay community shouldn’t be able to marry.

Then again, there are stories like these where Jerry Sanders, the conservative Republican mayor of San Diego, held a press conference to explain his about-face on the issue of same-sex marriage, and broke down in front of reporters as he talked about gay family and coworkers from whom he could no longer withhold the privilege of marriage.

The day after the election that put Obama into office, the second headline on the front page predicted Proposition 8 to pass.  Devastated and incredulous, I read the headline through the plastic door of a newspaper stand on the sidewalk, and wept openly.  Later that day, while sitting at my desk at Real Estate Job, I got a text from a number I didn’t recognize asking me (and others) to meet at Santa Monica Blvd. and San Vicente to protest.  By 9pm, we had blocked off traffic along Santa Monica, and began marching east. 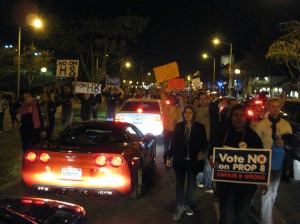 I walked alone in the crowd, chatting with random protesters and snapping photos.  I overheard two lesbians in front of me releasing their frustration: “It’s all the straight people who voted against us.  I bet there aren’t even any straight people here.”  I had to speak up: “I’m straight!” I yelled.  A small radius of people around me let out a cheer as the two women turned to see who had shouted with a mixture of bemusement and shock.  They hugged me and thanked me, but could not forgive the straight community for butting into their personal lives.  I couldn’t really blame them.  They were right.

At some point during the protest, the police asked us to stay out of the street.  Most of us listened, a couple were arrested (and loudly supported) as they shouted “Gay, straight, black, white, marriage is a civil right!”  I was so impressed by the police.  They were very patient, and gentle with the people they arrested.  They clearly just wanted us to get our protest done without any problems or violence.

This story posted yesterday on BBC News about two women who got married in New York is just fantastic.  Yeah, I cried a little.  They’re just so happy.

One thought on “Progress”