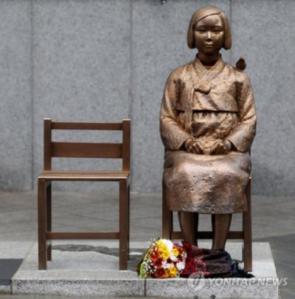 The western world seems to be generally unaware of the “comfort women” of World War II, Korean women forced into sexual slavery for Japanese forces.  I didn’t learn about it until I started training in Korean forms of martial arts.  My instructors were from South Korea, and for a while they wouldn’t admit Japanese students to our school.  One of them explained that his grandmother had been a “comfort woman,” and that many Koreans still harbored anger against the Japanese.  Though many formal apologies have been formally issued by Japanese administrations, the compensation paid to Korea by the Japanese in the 60’s–meant for the Korean people–was instead directed to other people (which is pretty messed up).  As a result, Koreans are still up in arms about the issue.

A bronze statue of a young Korean woman was erected in South Korea recently.  She sits facing the Japanese Embassy with an empty seat next to her for others to join her vigil.  This is a pretty serious issue over there, and has pissed off plenty of Japanese people who believe the issue closed (or at the very least dealt with through the proper channels).

I can’t believe I still haven’t visited Korea or Japan.  Gotta fix that.