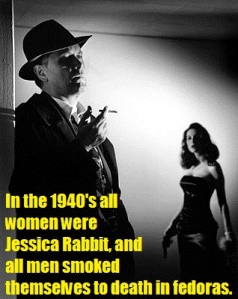 I made a more accurate poster for the play. you’re welcome.

I went to another student production from the theater department at the university where I work at Office Job.  Last year’s production was a total shit show.  This year was better, but not by much.

Today’s musical matinee show was the story of an author writing a screenplay, spliced in with the actual screenplay itself.  The screenplay takes place in Los Angeles cerca 1947, which means everyone chain-smokes and “needs a drink” all the time.  Needless to say, paying rapt attention was out of the question since I value my sanity more than my ability to give a coherent synopsis of some crap musical play.

But just like last year, it was a great source of angry haikus!

The main character detective also annoyingly narrated the whole damn play in a poor imitation of Humphrey Bogart, and could not stop talking about some woman’s physical attributes.  Meanwhile, the audience consisted of mostly women and gay men, so who the hell is this guy appealing to?

Nothing like a missed
musical cue to kill a
shitty production.

The orchestra missed a cue!  They jumped into the middle of a scene and just started playing the next number.  Yikes.

Jesus Christ he can’t
stop talking about “figures”
or smoking to death.

Apparently living in the 1940’s consisted of leering at women, doing anything for a dollar, and smoking like a chimney.

Here’s an idea:
Do something other than stand
still while you’re singing.

Each character gets their own chance to be more or less alone on stage and sing a little song to tell us their story.  One woman just sat and sang.  Then she stood and sang.  Then she moseyed on over to the edge of the stage and sang some more.  Fade to black.  She had the whole stage to herself, and couldn’t be bothered to lift a finger in the middle of a musical number.  I felt… disappointed, and… confused.

At some point I started keeping track of the number of times the main character demanded that someone “level” with him.  Final count: 6, but I may have missed the first few.

My favorite quote: “They’re closer than Denmark, and a whole lot more rotten.”