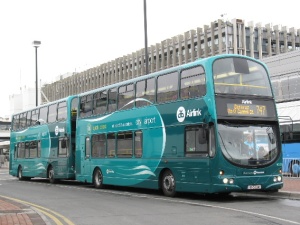 I’m in Dublin, Ireland!  I traveled for 27 straight hours, finally got to the hotel with Boyfriend and passed out immediately for an hour.  Then we had to go meet our ambassador, a local Dubliner who brought some vouchers and took us out for tea and croissants and scones, and told us about his city.  There was a quick mix-up at the Little Dublin Museum, and they apparently forgot all about us while we poked around and looked at some old U2 photos, so the head of the whole ambassador program took us out instead.  Thank you, Simon, you were really cool.

He gave us some great advice, then went back to work.  Boyfriend and I decided to get an early dinner at a French place he recommended (Guileton?) early so we can get a good amount of sleep. I got the best sausage I’ve ever had, and Boyfriend got lamb.  Our hotel room is small, with simple but pretty wooden furniture.  Although it sounds like some people are digging gravel outside right now… Anyway, I’m exhausted and excited about tomorrow.

I brought my ukulele with me, and made some friends at JFK as a result.  I totally hypnotized a little Indian girl, who watched me play for a good half hour before I left to pee and find some food.  She informed me, “I have a small guitar at home.”  I let her strum the uke, making different chords for her to play while a porter looked on, smiling.  Eventually he came over and chatted about how I reminded him of some woman on the kid’s show he watches with his little girl, Yo Gabba Gabba.

Nothing much else to report, except that tomorrow will be awesome, and I’m happy to see Boyfriend after so long a time.