Boyfriend and I arrived in Edinburgh today, and fell in love instantly.  Everything looks old, the accents are hilarious and fun, and we haven’t even been to the city center yet.  It’s been a drizzly evening, the cobblestones are jet black and shining under the streetlights.  The buildings are a grayish brown brick or stone, and everything else is green.  It’s just gorgeous. 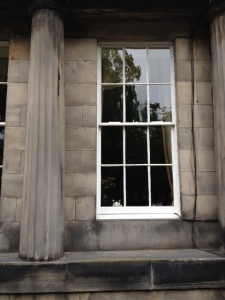 kitty dreams of the outside world

But I’m ahead of myself.  Breakfast this morning at the Harrington Hotel in Dublin ended with the waitress calling over her shoulder to us, “Be happy!”  So that was adorable.

We booked it out of there, and made the bus and the plane to Edinburgh in plenty of time.  I looked out the window while we took off, and nudged Boyfriend to wave and say with me, “Goodbye, Ireland!  Bye, Dublin!”  I asked him if he ever did that when his planes took off.  He said, “Yeah, in my head,” and managed to leave out “like a normal person, you hilarious weirdo.”  What a sweetheart.

We took a bus and walked about a mile to our bed and breakfast, St. Bernard’s Guesthouse.  We decided against paying for a cold breakfast and bought some croissants, honey, tea, and cranberry juice.

We wandered a couple of blocks over to find some pre-dinner food (we hadn’t had anything since breakfast except for Worcestershire sauce flavored chips, and some bacon flavored… crispy things.  We couldn’t decide if they were tasty or gross).

Quick side note on airports in Ireland and Scotland:
I’ve never seen so few people, nor so many easy to understand signs and well-organized layouts in airports, at home or abroad.  Kids go running around, playing while the parents read and chat.  The people were so friendly, unlike the TSA people at LAX who are in a constant state of fuck-off.  When I commented on this to a teller, he said, “Well no one’s after us.  They’re just passin’ through to get to someone else!”  Well said, sir. 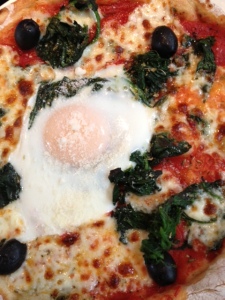 Anyway, pre-dinner food.  We wandered around and couldn’t find any place that served dinner before 6 except a place called Pizza Express, that sounds like shit but turned out to be a pretty upscale place, and served delicious pizza.  Mine had a fried egg on it, and we split a cider.  Amazing.

We headed back to the B&B to plan out our day tomorrow, and work up an appetite for second-dinner, which we decided had to have meat pie.  We found a delicious steak pie with blue cheese in it at The Stockbrige Tap just down the block from us, coupled with a Black Isle Stout (dark but brighter than Guinness).  We got to listen to the locals chatting in surprisingly comprehensible local accents, and had a nice walk home in the chill air. 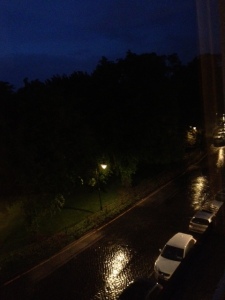 There’s a small park just outside the B&B where someone was hosting a large party today until late into the evening.  It says light so late here (the lights come on around 10) that it’s easy to stay out later than you ordinarily would.

I’m super excited about tomorrow!  We’re taking a bus to the city center to save time and energy to visit the Undergound, a statue of a dog, a famous pub, and a museum.  I’ve been too excited to sleep for a few nights because of the cool stuff we’ve had planned for this trip.