how could it possibly be that bright orange color? did i forget to add the unicorn shit?

I’ve never really tried to cook anything ambitious, so imagine my surprise when I made a soup from scratch the other day and it turned out crazy delicious.  It’s a butternut squash, corn and lemongrass soup, and it’s not difficult (assuming you have something that can puree soft vegetables).  Sister’s really big on healthy food right now, and she loves vegetables (apparently, who knew?), so she went nuts on this soup, which pleased me to no end.  It’s also really pretty, and super healthy.  My first soup made from scratch: Win!

After this one success, I thought to myself, “Self, you can cook anything!  Let’s make something else!”  At which point I started to fail.

Goal: make a delicious pumpkin-themed drink for my pumpkin carving Halloween party next month.  I landed on something called Pumpkin Cider. (see picture)

Actual outcome: brown, slimy, over-flavored, alcoholic muck I was reticent to pour down the drain for fear of angering it. (see picture)

I got all the ingredients together, and read the comments on the website (one person actually complained about it being too thick, but didn’t seem to follow the recipe).  I followed all the instructions, except for the one that said to add the spiced rum after the whole concoction had simmered on the stove for 20 minutes.  That batch quickly turned the consistency of snot, and was unceremoniously thrown out.  I added everything in the right order the second time, and the result was… totally overwhelmingly unpleasant.  It was a combination of things I love (pumpkin flavor, spiced rum, home made whipped cream, pumpkin pie spice, apple cider) that combined to create some kind of diarrhea-colored dream-killer.

Naturally I had boyfriend try it first.  He said something very kind and diplomatic like, “…I wasn’t expecting that flavor.  Let me try it again.”  Then he stopped trying it and said, “It doesn’t know what it wants to be.”  I could not agree more.  Epic Halloween drink fail. 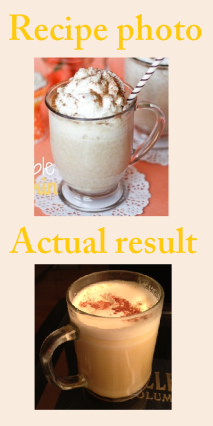 Then I got kinda depressed.  I really wanted this to work out.  I really want a cute little treat for my friends when they come to carve pumpkins and play spooky games!  The pouting went on for a good 24 hours, but I wasn’t about to give up because FUCK THAT.  I LOVE Halloween.  I was going to create something delicious for my friends for my favorite holiday, and they were going to love it, dammit.

So I tried again, this time with something called Liquid Pumpkin Pie.  It used a milk base and significantly less canned pumpkin, which was already a good sign that my ineptitude as a cook would not be manifested a second time in the form of some kind of brown sludge and disappointment.

To my utter surprise, it turned out fantastic. (see picture)  Boyfriend tried it, and nodded furiously with huge eyes, then asked for a mug of it to drink while playing WoW (pandas, ugh).  It even remotely resembled the recipe photo.  Success!