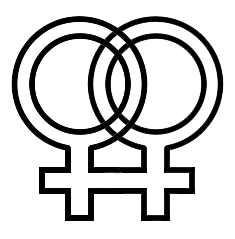 I got pulled into Little Mole Boss’s office today to get an earful about how she’s heard that I’m not “friendly” enough, and that I’m not “giving 100%.” She recognizes that my part-time position here is not super mentally stimulating, but she still expects top-notch work, which is an enigma as far as I’m concerned.  I was also instantly annoyed at the assumption that women should be ‘friendly’ all the time.  There’s a guy in our office who is terse and occasionally downright rude, and he’s worked here for six years or so.  I’ve never said an unkind word to anyone in this office in the two years I’ve worked here, so why… *sigh*  It was not a good start to the day.

But then it got better. Grabbing lunch around noon, I noticed the black woman running the register had two linked female symbols tattooed to her arm. I’m a huge supporter of gay marriage and the gay community in general, so I said, “I like your tattoo.”
She froze with her arm out so I could get a better look. “Thanks, you know what it is?”
“Yep.”
She smiled back, “Are you one?”
I gave her a big smile and said, “Nope, but I got your back.”
She gave me a tiny salute and said, “Thanks for your support.”

And that is why today was a good day.