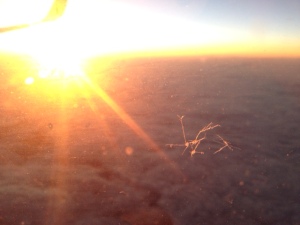 Boyfriend and I are in Hawai’i!  We arrived in Honolulu last night and will spend ten days here.  I’ll be speaking at a social sciences conference next Saturday, June 1st, held at a hotel in Honolulu, but until then, Boyfriend and I are bumming around the island in my uncle’s old Kia.  There’s no air conditioning, the breaks are crap, and the interior reeks of wet dog.  Neat!

Uncle Bobby and his super cool wife Nancy picked up me and Boyfriend from the airport and showed us around their guest house (they call it the cottage, and it’s fucking amazing) where we’re set up to stay for the first five days.  They gave us some eggs, milk, cereal, fruit, and macadamia nuts, so tasty!  This morning we woke up around 715, got dressed and went over to have breakfast with them and their adorable golden retriever puppy, Bella (we’re obviously best friends now).  After cereal with banana, some tasty mango, lychee from a neighbor’s tree, and tea, we discussed our plans for the day. 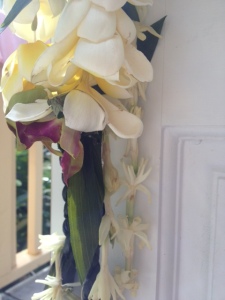 the leis Nancy gave us when we arrived

Nancy, Boyfriend and I took a walk with Bella down to Lanikai beach where we walked waist-deep in to the water for a while and threw a stick for Bella.  On the way, we ran into Barbara and her mother, Mrs. Fox.  It was nice to see them.  Barbara’s niece will be moving to LA soon and wants to be part of the industry, so I’ll introduce her to Boyfriend and our friends who will show her the ropes.

After our walk, Boyfriend and I drove into town for malasadas (a family tradition), then got lunch at K and K, then sat on the beach a while to digest.  it was super windy today, so there were a bunch of kite surfers out (Boyfriend and I liked it when they would go up high, then crash down into the water with a splash).  Then we headed back to the cottage to dump our stuff so we could head back down to Lanikai beach to swim around.  The water was really choppy due to the wind, so we got tossed around a good amount. 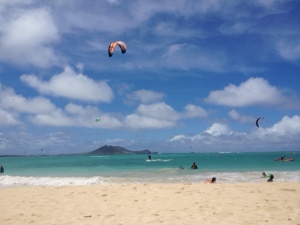 At one point, Boyfriend said, “Ow!  I think something stung me!”  He said it didn’t hurt much though, so I figured he was hallucinating or something.  Turns out he was definitely stung by a jellyfish, probably a man-o-war, since we saw about a dozen of them floating around today, but neither of us saw what got him.  He has a very faint red dotted line along his right trapezeus that flows down toward his shoulder.  It doesn’t hurt or even itch though, so he’s just excited to have had a new experience.

After we rinsed off and changed, we drove across the island to Shimazu’s for shave ice (Matsumoto is good for tourists, but Shimazu’s is a local favorite).  Even their small size was WAY too big (as big as my head!), but it was pretty tasty.  I called my dad to see how he usually gets it, and ordered one of the same: azuki beans, ice cream, and green milk tea royale.  It looked like an unripe, mishapen, frozen coconut, but tasted pretty good.  Boyfriend got orange and milk tea with mochi cubes.

On the way back to the car, boyfriend’s sandals started irritating him, and he had to take them off 😦  So we headed toward our next destination and bought him some $8 sandals that he’s super happy with now.  Then we speed-walked to a spot on the beach where there was a free hula demonstration.  So cool!  Boyfriend and I really liked it.  He particularly liked this one old guy who was amazing, and clearly the instructor for the men, who wore long, royal blue loin cloths that they constantly pulled at to make sure they hid their junk, haha.

Then we walked a couple of blocks to a great hole-in-the-wall sushi place called Hanna no Sato.  Delicious.  After a long drive back across the island, I’m totally pooped (and a bit sunburnt) and ready for bed. 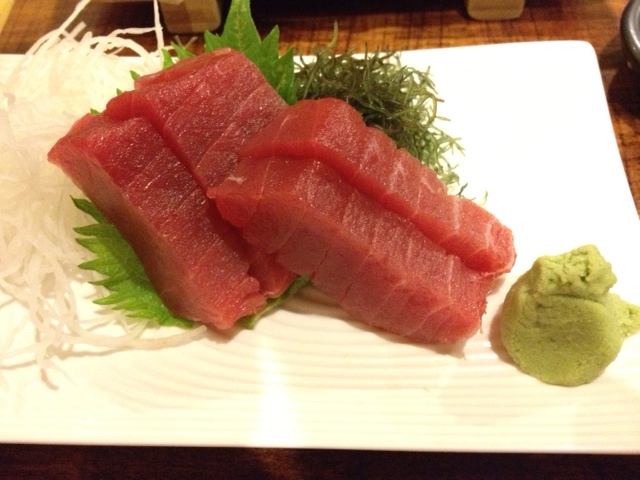