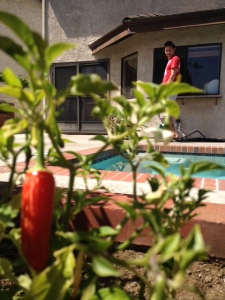 serrano boyfwend is ready to pick

Boyfriend was bummed out about something a few months back (I think he didn’t land a job he really wanted), so I decided to cheer him up by buying a bunch of herbs to plant in the backyard.  We planted them together, and it’s actually been pretty delightful to watch him get excited about tending to them and watching them grow.  A common question I pose to him after we’ve eaten or had tea is, “Wanna go smile at the plants?”

I got him two basil, two rosemary, one cherry tomato, and one serrano chile plant, which he has used in the chilli he makes so adeptly.  Since this batch of gardening has gone so swimmingly, we added five kale plants to the collection, all of which are thriving (we can’t wait to eat them).  So far we’ve eaten something from every plant: Boyfriend eats the basil straight off the vine whenever a tomato ripens, he used the rosemary in a French chicken recipe that I could’ve eaten until I exploded it was AMAZEBALLS, and I use the rosemary and basil for herb butter.  The serrano chile made it into his trademark chilli, and Diminutive Friend’s salsa, which she made from tomatoes from her garden in back yard of the house she bought in the Valley (still so proud of her for that).

Boyfriend turned 30 in August, and Diminutive Friend took the opportunity to buy him any hot pepper plant he wanted (he’s a fan of heat).  We now have a jalapeno plant that’s just sprouted its first flower (or maybe it’s turning into a little pepper now… I’ll have to check today).