So… I dunno if you’ve ever heard of this stuff.  It’s called wine.  It’s this thing where people take grapes, and do stuff to them, then they squish ’em, then more shit happens to them, then BOOM, fuckin’ wine.  It’s delicious by the way.

Waaaaay back when, I traveled alone to Romania to meet up with a group of random students to do volunteer work and explore the country.  We spent the first two weeks in a city called Arad.  Lots of dirt roads, gypsies, wandering dogs, and other shit to make young Americans feel unsafe.  Plus we were there to spend time with “derelict youth” or something.  Most of us were around 19 or so, so naturally, we got drunk as often as possible. 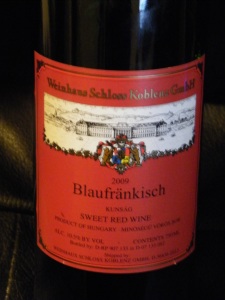 Everything was über cheap, so we threw our U.S. dollars around like that shit was weighing us down.  I found this little liquor shop in town.  The owner flirted with me and the other girl I was with (he said something like, “you ladies are so tan, I wonder if your skin is light under your clothes” or some shit with his best broken English and child molester smiley-wink.  What an asshat).  Anyway, he sold really fuckin’ cheap wine that turned out to taste like sugar-infused liquid gold.  I shared my bottle the first night.  The second night, everyone showed up to hang out with their own bottles.  What a bunch of lushes.  It’s a fond memory.  There was a guy there, he was… 17 I think, named Adi.  What a cutie.  He was my first adult white boy crush.  He was so sweet.  I should hit him up.

Right, so it took me forever to figure out what the fuck that stuff was (I was clever enough to NOT bring the label home with me).  But I found it (or something just like it), dammit, and it is delicious.  In fact, time for a refill.  No I’m not fucking kidding.

So anyway, I finally found this stuff.  It’s called an Ausbrüch, which is usually apparently white, but this one is red red red.  The only real drawback is that it’s salty or something, so if I drink a bunch of it, I have to wake up twice in the middle of the night to chug a whole cup of water.  Huh.

Holy shit!  I just found Adi on facebook!  Sent a request with a message like, hey you probably don’t remember me, we held hands and drank wine and I told you to stop smoking and stuff.  kthxbai!  For the record, I am not optimistic about this reunion.  He probably remembers me as the boorish American chick who harassed him for two weeks straight.  Ugh.  My first drunken facebook contact might turn out to crush me entirely.