Full disclosure: Once Boyfriend left with his laptop, I didn’t have anything to upload my blog from every night, so I kept notes on what happened each day on my iPhone to ensure that my memory didn’t fail me or start making stuff up.  Thus, the following posts are written at the end of each day in Oban.  After that I stopped taking notes, and must pull from my still-fresh memories.

I woke up when Boyfriend did, a little earlier than my alarm for the bus so he could make it to the airport on time to head back home while I made my way west across the country to Oban on the opposite shore.  I didn’t cry when he left (I cried a little after), but we were sad to part.  I didn’t have an appetite for the croissants and honey we bought for breakfast.  The tea we had previously enjoyed so much tasted bland and dirty; I poured it out.  I brushed my teeth, dressed, packed up my things and left without a backwards glance.

The 29 bus took me to the city center, as usual, and I walked to the train Waverly station.  A very nice woman helped me buy a train ticket to Glasgow, and a return ticket from there to Oban.  the Dublin airport and Glasgow train station both have a little restaurant called The Upper Crust that features delicious sandwiches on baguettes.  I got one with bacon, spinach, cranberry and brie.  I wish we had these in the U.S.  I made plans to eat there when I flew out of Ireland at the end of my trip. 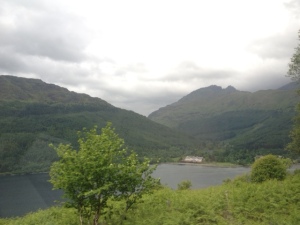 i want to go to there

On the train, I sat at a table with an older woman who read a newspaper with an enormous photo of a topless woman with startling nonchalance.  I was duly impressed.  The train to Glasgow was a quiet, steady, and quick.  I couldn’t believe how much countryside we passed on our way.  The woman at my table glanced up whenever I whipped out my phone to take a photo of yet another unremarkable field.

The trip to Oban was three hours plus, and full of beauty.  I was astonished at the greenery, the seemingly endless lakes with houses peppered around the shores (or not), the fly fisher, the two men on a row boat that I saw in both directions, the sheep (!), the eternal hills capped with mist and mystery.  This was my first taste of the Scottish highlands.

I arrived at the end of the line at a very small (and totally unmanned) train station in Oban, and was directed by a woman working her a newsstand in the station to the tourist office across the bay.  As I walked the gentle arc around the pebbled shore below, I couldn’t stop staring at the water, the islands off shore that looked so close I lifted my hand to gauge the distance, just in case I really could touch them.   Happy people, families and (mostly German with a few French) tourists, chatted as they passed; a few benches looking out toward the islands were quietly occupied by silent, gazing groups of two or three people.  I looked to my right, saw a blue and white sign for fish and chips, and made a note to settle into my bed and breakfast, then head straight back to town, get some fish, and find one of those lovely benches to stare into the distance, relax my bones, and taunt the seagulls with my catch.

The Tourist Information (TI) shop was surprisingly busy.  Apparently Oban is known by local tourists (that is, those visiting from Ireland or the UK) as a good vacation spot for the older generation.  Let me say that again: the older generation.  Everywhere I went, every tour I participated in, every shop I visited, I was the youngest person there by a couple of decades (at least, usually more).  This surprising age gap made me feel especially lonely and out of place, especially without Boyfriend.  Everything was so beautiful, I wanted so badly to share it with him. 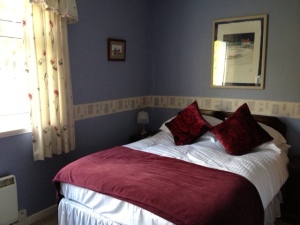 A rather handsome boy at the TI (he couldn’t have been more than 18, I’m just terrible) said that he lived right in the neighborhood of my B&B, which shouldn’t have surprised me at all since the town is so small.  I took a cab for just a few pounds with captivating views of the bay to my right on the way up the hill, and was shown to my room by the mother of the woman with whom I had corresponded via email to book the room.  A large window on one wall let in plenty of light, and gave me a view of the backyard (clotheslines mostly).  There was a stack of mail-order DVDs on the sill, out of which I pulled an episode of Hercule Poirot (Four and Twenty Blackbirds), and the second half of the Pride & Prejudice with Colin Firth (the first half was nowhere to be found).  My evening entertainment was shaping right up.  The tea caddy had a set of real china: one cup, one pot, and a different little package of cookies each day.  I dumped my stuff unceremoniously on the bed, changed into the stylish and very comfortable blue sneakers I had bought just for the trip, and headed back to town via the one and only road down the hill (featuring more gorgeous views of the town on the water). 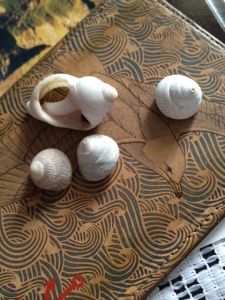 on my appropriately decorated iphone case

I got my fish and chips, and sat down next to a solitary woman on a bench facing the water, just like I’d planned, and fought to keep a particularly brave seagull away from my dinner.  I signed up for a ferry to the Isle of Mull, a bus ride across the island narrated in both directions by a very friendly and funny driver, ferry to Iona, self-guided tour of the ruined abbey and still-standing monastery on Iona, and then all in reverse.  I decided I should wear myself out after sitting all day, and had a long walk around town, exploring a couple of blocks inland from the water to find some cafes and churches (all closed), except for the church at the end of the bay, which was plain inside and out, and had a lesson for children going on when I stepped in.  I took a few steps down from the sidewalk onto the rocky shore for a short way, and picked up some shells (where did I put those?).

I walked back up the hill to the B&B around 8, took of my shoes, read my Kindle, showered, popped Pride & Prejudice into the DVD player and crawled into bed to relax and hate Mr. Wickam.  Boyfriend called via Skype about midway through; it was nice to see his face.

The bed was the softest, warmest I had slept in during the whole trip, and I slept soundly in the quiet B&B near the top of the hill overlooking the bay in Oban.