I bought the entire collection of H. P. Lovecraft’s stories (for a dollar!) on my Kindle Touch, and… I’m in love.  This man’s writing style is everything I crave when I pick up a book: damned souls pulled in by seductive haunts and eerie landscapes, written in the turn-of-the-century style that takes its time to set the mood and make me feel actual fear for the main characters.  What was frightening in 1900 is frightening now.  No hyper-clever plot twist needed, just a draining sense of safety.  Like a shadow creeping with unnatural quickness, like the slow approach of distant drums, a cloak is cast over my shoulders as I read, bringing a chill draft and a musty scent of old lunacy.

I just can’t seem to get enough of it.  His writing is more than descriptive, it’s airtight.  I hope others in my generation will allow their curiosity to take hold, and take the time to read his stories (instead of just alluding to them endlessly).

I found myself in the strange position of explaining the Cthulhu phenomenon to my dad over the weekend.

STOP COMPLAINING AND EAT IT

It started with this hilarious-looking game, Miskatonic School for Girls, where members of the H. P. Lovecraft universe make up the staff.  The point of the game is to help your house’s students retain their sanity longer than your opponent.  The card that pushed me over the edge?  Cthulhu as the lunch lady.

First I explained what Kickstarter is; an online service that allows people to raise funds for independent projects for which there are too few/zero financial sponsors.  Then I told him about the game.  Then I tried to explain how Cthulhu has become an internet meme for some reason, but I’m not sure how, so I found myself saying stuff like, “He’s an underwater god from the Lovcraftian universe, but people online make fun of him by making him out to be emo or adorable.”  Which makes no sense of course, but it’s an internet meme, so all it has to do is entertain in the void to be a success.

how do I even begin to explain Cthulhu Spock...?

Cthulhu really is the perfect internet meme, now that I think about it.  He’s an obscure reference to a piece of literature at the root of sci-fi/fantasy nerd country that few people have actually read, but somehow everyone knows and loves enough to poke fun of and ironically turn into plushies.  He devours souls, people.  And now he’s a knitted baby toy. 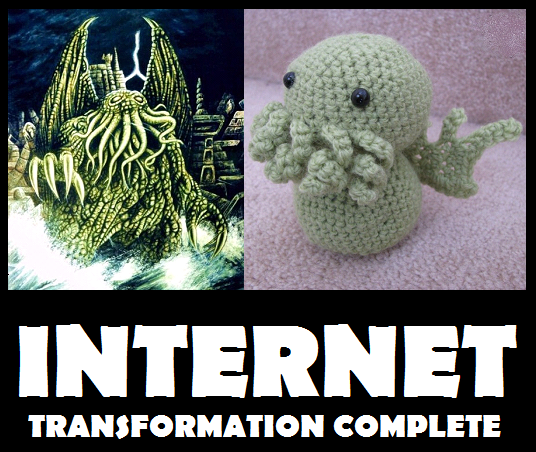