I’m starting to get the feeling that when people talk about putting their lives “in perspective,” we all mean something different.  I tend to try to figure out how my childhood self would feel about my current life.  I think she would be pretty pleased. 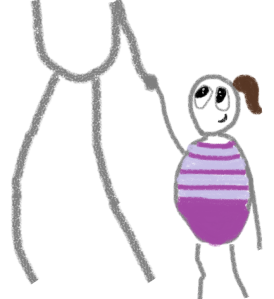 I loved that outfit

Stuff that would impress younger me:
-I teach martial arts for a living.
-I work in an office, and have my own desk.
-I dress like an adult (and occasionally quite stylishly).
-I’m college-educated.
-I have a handsome boyfriend who treats me like a princess.
-I have a variety of friendships.
-I live with cool roommates.
-I give good advice.
-I am loyal.
-I still dress up for Halloween.

I was struck recently while spending time with a friend at her job that my younger self would think I am just super cool for doing that.  Little Iron Friend works at a rock climbing gym, and part of her job is to set up climbing paths on the walls.  I went over to keep her company, pick out bolts that fit each piece, and climb the paths to make sure they made sense while listening to an N’Sync inspired Pandora station (every time the next song came on, one or both of us would go “Oh my god, this song!  Hahaha!”).  I left the gym around 1am, feeling like the kind of adult my childhood self would look up to with big, shining eyes and think, “Wow.  She’s so cool.  I wanna grow up to be like that.”

While we were hanging out at the gym, Little Iron Friend randomly asked me, “How does someone who tends to get into abusive relationships break that cycle?”  It’s something I’ve given a good amount of thought to, so I said something like, “People tend to seek out what’s familiar, even if it hurts them.  People find comfort in the predictable, even if what they can accurately predict is abuse.  Breaking that pattern takes determination, focus, confidence, and a lot of support from people you trust to have your best interests at heart, even when you don’t.”  I suggested a safeword between friends to let the other know that a significant other/boss, etc. has crossed the line into abusive territory.  Little Iron Friend said, “I’d be comfortable having a safeword with you.”  I said, “That sounds a little sexy, but I’m honored.  Likewise.”  She doesn’t seem particularly happy at either job, so she said that in a year, if she’s still complaining about her jobs, that I should use our safeword: Kung Fu Ninja.

Kate Beaton did a whole bunch of comics about encountering her younger self and the opinion said self would have of her as an adult.  I could take my younger self to the dojo, to rock climbing, to the beach, I could show her the cape I’m making myself, watch Home Movies and Star Trek: The Next Generation with her, eat Japanese food and coffee ice cream, hang out on the balcony of my apartment, play board games… Yeah.  I think she would be pretty pleased with the way she’s turned out so far. 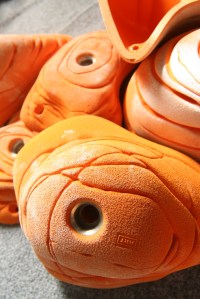 I went rock climbing in April of last year with some friends.  We had a blast, and what a weird sport to get into.  The people who are really into it tend to be hippies, or at the very least like to grow their hair long and talk about their auras.  Regardless, watching someone do some serious bouldering is totally awe-inspiring.  I got to know a couple people there, who warned me that the rock climbing gym is a “meat market,” and to watch out for guys who offer to help too eagerly.  They were right, but everyone else was super cool.

One of the women who works at the gym also does Kung Fu (southern style; that means fast hands, no flying kicks or big fancy swooping gestures).  She and I have become buddies, and when she learned about my martial arts background, she invited me to take a class at her gwoon where she also works.  I took a few beginner’s classes before one of the head instructors took me aside and said, “Why are you in the beginner’s classes?”
me: Uh, I dunno, gotta get the basics down, starting at the bottom…
him: You should be taking intermediate level classes.  You’re obviously having no problem learning the moves, let’s move you up.  You’re picking it up really fast, you have a natural talent for this, so lets get you in some upper level classes.
me: [probably blushing] …Ok.  Thanks.  Sounds good.

[Little-known fact: I blush at the drop of a hat.  You could say, “Hey, nice shoes,” and I would turn three different shades of scarlet.  Ok that’s a little extreme, but I radiate radish red in the face of even a little genuine embarrassment.]

So I’ve taken… three intermediate level classes, and I’m not having any trouble keeping up with the moves or the pace.  But I am… I think the technical term is “really fucking sore.”  Driving to work today, I winced turning on my blinker.  My shoulders are taking the brunt of the abuse (loads of pushups, punching, blocks).  My forearms are covered with bruises from three star training.  Iron palm doesn’t bother me for some reason.  You’d think jabbing and slapping a punching bag filled with sand would cause me some discomfort.

I saw my buddy break a coconut with her bare hand the other night.  Craaaaaazy.  And she’s totally fine today.  So weird.  I told my dad about it, and he said, “Don’t do it.” lol

EDIT: I saw my buddy today, and she pointed to her chin and said, “See this?”  It was a bruise from when I kicked her in the face during class two days ago.  We were doing spinning back kicks, and she was holding the pad at her chest level (being significantly shorter than me, the pad was actually at about my waist level, and I’m used to kicking high, so… yeah).  My foot glanced off the pad, and my heel landed square on the lower left side of her chin.  Apparently the pain radiated up through her skull and ended at the opposite eyeball.  While I feel really bad about this, I wasn’t really trying too hard, so I’m feelin’ pretty good about my kicks, lol.