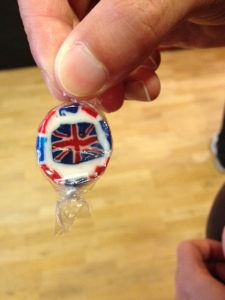 We had such high hopes for today, but we couldn’t make it to the Palace at Holyrood.  We spent the majority of the day at the Britannia, a yacht for the royals that’s actually considered a palace on the water.

We wandered through just a few portions of each level of the ship, but it felt enormous.  The engine room was pretty amazing (a visiting German engineer, while on a tour of the engine room, is said to have declared, “These museum pieces are very nice, but I would like to see the engine room, please.”), lots of shiny copper pipes and glass covered pressure gauges.  The whole thing is lovely, if a bit cramped, but then I’m not used to maritime accommodations.

We took a break to have lunch at the only restaurant on the ship, The Royal Tea Room.  The wait was about 20 minutes and well worth it.  We had Famous Edinburgh and Assam teas, salmon sandwiches and Mull cheddar sandwiches, mushroom and truffle oil soup with giant french fries with seasoned salt on the side, and a scone with jam and clotted cream.  Too much food but super delicious!  We jumped back on the tour bus that brought us out, and listened to an informative, occasionally silly dialog between two fantastic accents (man and a woman) regarding the points of interest we passed on the way back to Edinburgh city center.

tea time at the palace on the water

We booked it to Edinburgh Castle, which is almost a thousand years old, and has never been taken in battle.  Recently, archaeologists found evidence of settlements on that very site as far back as 900 BC.  The castle itself has been rebuilt in various places, and purposefully changed by the Victorians in the late 1800s to look more “appealing,” and fulfill their romanticized idea of what the middle ages would have looked like (not super accurate, FYI, but kinda pretty if you’re not a stickler for accuracy, which I am, so fuck you very much, Victorians).  Needless to say, I loved the castle.  It also has the best view in the city, even on a rainy day like today.  You can see the clouds rolling across distant green hills, cold and wet, lush and fertile, secret and inviting.

I’ve been craving fish and chips since that delicious bunch I got in Dublin, so we poked around until we found some (we checked out The Last Drop, a pub named in reference to the drop of a body on a noose rather than a drink, but they didn’t serve fish and chips).  But the fish was so boring!  I was so disappointed.  My last real meal in Edinburgh, and it was dull.  At least I had some really excellent fish last night at The Witchery.

The bus ride home was drama-free after yesterday’s slight panic about how we’d find our stop (which is not named on the list of stops in town).  Luckily, I’m awesome, and recognized our neighborhood by a shop name that was similar to a pub we went to on the first night, and the small clock tower that houses the pizza place of all things.

We’ve been home at the B&B for a couple hours, packing and getting ready to leave tomorrow.  Boyfriend has extra room in his bag (which has wheels, unlike mine), so he’s offered to take some of my stuff home with him: gifts for friends and family, and some of my dirty clothes.  What a sweetie.

I’m really gonna miss Boyfriend, but it’ll be nice to be on my own.  I’m so used to having someone to point things out to, share experiences with, hold hands with when it’s cold.  That part is going to be hard.  But I’ll enjoy having no one to double check with when I have an impulse.  That’s always fun.  I still have to make some solid plans for Oban.  I’m thinking of doing a day trip to Iona and Mull, and going horseback riding.  We’ll see.  If I can find a beautiful spot to sit, I’ll be happy.