Breakfast was at 845 today: Canadian bacon, mushrooms and a poached egg with toast and tea, just like yesterday. I had about an hour to pull my things together and be out by 1015.

the man in the blue shirt and cap is the owner

My train to Glasgow wasn’t until 1, so I meandered down the hill and found a picnic table to sit and enjoy the view for the last time.  I pulled out my ukulele for he first time since JFK, tuned it up, and played just a couple of songs before some happa guy with glasses approached me and said he loved playing uke.  We started chatting and I invited him to sit down for a spell.  Turns out he has the same Lanikai ukulele back home in Atlanta (he was American), and an almost identical case (from this store on Etsy). We talked about what we liked about Oban, Edinburgh and Dublin (he loved Galway).  I asked where he’d eaten (food is an important topic while travelling), and he named a few fish and chips places, but he hadn’t been to the shack where I’d had oysters every day.  So we went and had half a dozen oysters each (his treat).  He was thoroughly impressed, of course.

We found a seat under the clock tower near the bus stop (his bus left at noon), and chatted some more until he left.  While we waited, an old man approached us with a smile and said, “I thought I should know your names since I took a photo of you!”  He had taken a photo of the clock tower, and since we occupied its base, we ended up in the shot.  I offered him a seat next to me, and he proceeded to monologue with pride about his Panasonic digital camera (similar to mine, but nicer), how he didn’t need to add extra lenses (so cumbersome) because of the excellent optical zoom on his camera.  And so on until he abruptly stood, blurted a friendly good-bye, and walked away.

My American buddy and I exchanged emails; he lives in Atlanta and travels a good amount, so we’ll have to keep in touch.  After he left I went back to my picnic table and had some fish stew from a stand on the bay, so delicious.  I grabbed a good seat on the train, and started reading A Walk in the Woods, a hilarious and fascinating book by Bill Bryson about walking the Appalachian Trail.  I got bit by the hiking bug during my walk around Kerrera.  I’ll have to do some hiking when I get back.

After a transfer at Glasgow I was on my way to Irvine to see Scottish friend, whom I haven’t set eyes on since the 2004 trip to Romania where we met.  She met me at the train station with a hug, and laughed when I tried to get into the driver’s side of the car.  We picked up her cat from the vet, and chatted during the rather scenic drive to her house, where she lives with three very friendly and playful cats, and her boyfriend of several years.  He had food poisoning, and couldn’t come to dinner with us (which I was happy about, actually), poor guy.  Scottish Friend took me to a restaurant called Scott’s (I think?), where I immediately ordered the haggis as a starter, and an enormous seafood platter for the main dish.  The haggis was… amazing.  So delicious.  It was put together with some mashed potatoes on top and a cream sauce over the whole thing (which is typical, apparently) in a somewhat cylindrical fashion.  I was extremely impressed.  I asked Scottish Friend if people there really eat haggis all that often, and she said eats it about twice a week.  I’ll have to find a good place here in LA for it (although it’s such a volatile dish, that should be an adventure). 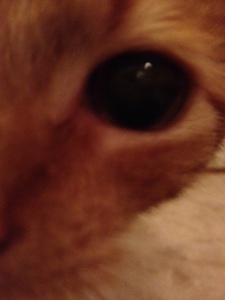 OHAI I DIDN’T SEE YOU THERE

We went home and looked through her photos of the Romania trip.  She remembered almost everyone’s names (I couldn’t remember hardly any).  She and her boyfriend and I stayed up and chatted about accents (apparently it’s commonly known that Scottish Friend is universally difficult to understand, since she has somehow managed to create an accent all her own), and their burning desire to visit America, bolstered by the boyfriend’s current obsession with Man v. Food, a show on the Travel Channel where some American man with inevitably high cholesterol eats ridiculous portions of enormous foods at diners and the like all over the country.  I told him I would be sure to show him all the best places too eat around Los Angeles: Korean food, sushi, pho (which they had never heard of!), burgers, pasta, sandwiches, etc.  This fanned the flames a good amount until it was time to go to bed.

I slept in their guest bed, which was the softest, warmest, fluffiest cloud-of-a-bed I had slept in during the whole trip.  I was devastated to get up at 5am to catch a flight in Prestwick to Dublin.  Scottish Friend was nice enough to wake up early and take me to the airport.  How do we get along so well after all these years?  Strange how a connection between two people can be so easy.  She is such a blast.  I can’t wait to see her again, soon I hope.