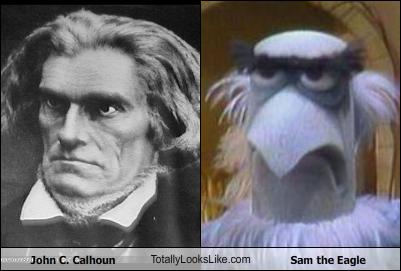 "You're shitting me, right?"

Yikes, right?!  Look at that mug!  And the neckbeard, lol!

The 7th Vice President of the United States, this guy didn’t stop at horrifying people with is face.  He supported slavery, famously calling it a “positive good.”  He was known by supporters as the “cast-iron man” because of his staunch defense of his political stances.  Like how slavery was natural because every society has a ruling elite which reaps the benefits of said elitism due to the back-breaking labor of the lower castes.  It’s natural.

Apparently he died ten years before the start of the Civil War, so he didn’t get to see all those slaves freed.  Can you imagine if he did?  How could he possibly look any more displeased?

In my first art history class back in high school, my teacher (Mrs. Hill, so awesome!) told us about the advent of the camera, and how it essentially put portrait painters out of work.  Our teacher told us a story about how, around this time, some snooty queen asked her court portrait painter why she shouldn’t fire him and hire a photographer instead.  The painter apparently responded, “Your Highness, the camera cannot lie.”  Awesome answer.

Bearing this truth in mind, why the fuck didn’t the artist of this portrait do a little more to make VP Calhoun look like an intelligent, respectable government official instead of a wild-man who was dressed up like a gentleman for a day as a joke?  Answer: John C. Calhoun was so out of his mind enthused about slavery, even a formal portrait artist couldn’t gloss over all the crazy in those eyes.  There must have been some surprising shit off camera to entice VP Calhoun to make a face like that.