Since I have more fight training than the average person, I’m always looking for ways to teach people how to defend themselves.  I think it annoys my friends.  Sorry guys.

But what’s the point of having useful knowledge if you’re not going to share it?  Seriously.  It has to be shared.  So I’m going to post a few short lessons on how to fight without injuring yourself. 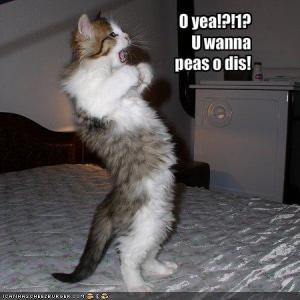 Basic tenants of fighting:
-Keep your eyes open, even when under attack.  Most people close their eyes when they see a hit coming.  Fight that reflex.  You need to see what’s going on.
-Keep your hands up.  Protect your face and head.
-Most people don’t know how to fight, but that doesn’t make them harmless.  Be cautious.  You never know who you’re up against, how much training they might have, how many friends they have with them, or if they’re carrying a knife (or worse).
-AVOID FIGHTS.  The best way to keep yourself from getting beaten up is to avoid fighting at all.  Keep an eye out for trouble before it happens.  Make friends, not enemies.  Be polite to the barkeep.  Don’t start anything.  Period.

Lesson 1: How to throw a punch
A lot of people (children and adults) instinctively hide their thumbs under the rest of their fingers when making a fist.  DON’T DO THAT.  All the pressure of the punch will travel straight to the first knuckle of your thumb and break it.  Which means that you just broke your own thumb, and you don’t get to brag/complain about it later.

Step One: Make a proper fist
Fold down all your fingers (excluding your thumb) until all your nails are hidden against the palm of your hand.  Place your thumb across them like ribbon on a present, making sure that when you throw your punch, your thumb will not make contact with the target.  Don’t clench your fingers; fold them into place. 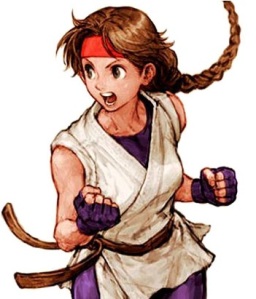 Step Two: Keep your wrist straight
The force of the punch should travel straight through your hand and wrist without any nasty snapping sounds.  Throwing a punch with a bent wrist is a great way to injure yourself, and make your opponent’s job all that much easier.

Step Three: Prepare your body
A solid punch starts in your feet.  Get in a solid, relaxed stance; left foot in front (if you’re a righty), both hands in fists near your face with elbows pointing to the ground.  Bend your knees a little.  Drop your shoulders.  Keep your eyes on your target.

Step Four: Crack the whip
I often liken throwing a good punch to cracking a whip.  The motion starts by pushing off from your back foot.  Next, swivel your hips so they turn to face your opponent.  Throw your right shoulder forward.  As you throw your fist toward your target, your elbow should be behind your fist, so that your forearm defines the trajectory of your punch.

Step Five: Obliterate your opponent
Contrary to what you see in movies, your fist should travel in a straight line, not in a curve across your opponent’s face.  Think of the target in front of you as an obstacle your fist needs to get through in order to reach your real goal.  Punch straight through your target to your imaginary goal.

Step Six: Repeat
My personal motto: If you’re going to hit him once, you might as well hit him twice.  If you’re in a position where you’re forced into physical confrontation, fight to win.  The first hit is to warn them that you’re not going to surrender.  The second one lets them know the first one wasn’t a fluke, and yes, you’re dedicated to winning the fight.

After all this, book it!  Your objective should be your safety, not making your opponent bleed as much as possible.  Once you’ve won, walk away.  Fast.  Long fights are the worst.  End it before you accidentally give them an opening to inflict some damage.  Even amateurs get lucky.