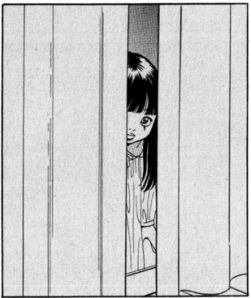 I showed Diminutive Roommate some manga the other night, specifically Mail of the horror genre, and let me tell you: she is freaked out.  It’s about a detective whose clients hire him to exorcise ghosts.  Spooky!  Diminutive Roommate is currently reading through the second issue in as many days.  She came into my room last night to sit on my bed with me while we both read our respective ghost stories because she didn’t want to read it alone.

One chapter involves a little girl who was stuck in an elevator.  As she climbed out, the elevator drops and chops off her legs.  At first, the ghost of just her legs is occasionally seen standing around in the elevator.  But the little girl dies a few years later, and a ghost of just her upper half can be seen dragging itself around the building in search of her legs.  Yikes.

Naturally, there was an article in the LA Times this morning about a woman who was in an elevator that got stuck between floors.  Apparently, she “climbed out of the elevator, but the car started moving again…The car dropped onto her, crushing her.”  She died.  I sent the article to Diminutive Roommate.  We may or may not be sleeping with the lights on tonight.

The Mail series is really excellent.  If you want to be spooked without too much gore, this is perfect.  There is, of course, death, and some murders, but the majority of the stories center around the mysterious circumstances surrounding the hauntings.  The author, Housui Yamazaki, is also the illustrator, so he gets to do exactly what he wants with each page.  The result is some of the scariest page-turns I’ve ever experienced.  Once, I was so spooked, I literally burst out laughing and had to put the book down for a minute while my heart hammered in my chest.  And it wasn’t gross or gory, it was just a well-done story arc that climaxed at a page turn and freaked me out.  Highly recommended.

As long as we’re on the topic, I have to mention The Kurosagi Corpse Delivery Service.  Housui Yamazaki illustrates this one, too, and it’s pretty great.  It has more gore than Mail, but there’s a surprising amount of humor in it.  I found myself laughing aloud at the dialog in every issue.  The premise is that a group of college graduates are having trouble finding work, so they group together to use their weird abilities (dowsing for bodies, speaking to the dead, etc.) to help the dead reach a place where their souls can rest, often resulting in shenanigans and various tom-foolery.  It’s a good, spooky time.

If you’re not into manga, I understand, really.  But these two are worth a shot.