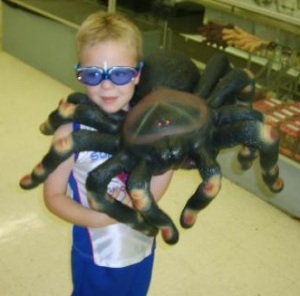 I am not a fan of bugs.  I think they’re amazing in a cold, scientific way, but if they could all die without adverse effects on the planet and its flora and fauna, I would be happy.  Once, when Boyfriend and I first started dating, I saw a spider on the ceiling of his bedroom and squeaked, “Onoes boyfwend a buggie-bug!”  Bear in mind I’ve sparred with men more than twice my weight with two feet of height on me.  Boyfriend was delighted to see a clearly very vulnerable killing machine of a girlfriend, and came to my rescue armed with a tissue.  Thank you, Boyfriend.

Here are two emails I sent him on May 29th at 1130pm when he was out of town for a couple of weeks:

Calico found it, she’s attacking it.  She stopped.  She keeps smelling it and watching it walk away.  JUST EAT IT GAH it’s under my chair!  WHY ISN’T IT DEAD YET.
Wait, did she just eat it?  Haha yeah, she ate it.  Good kitty.

I have recently come to a horrifying realization: There will always be a spider.  So I either have to always have to have a spider-killer around (Teacher Roommate fills that role when Boyfriend isn’t around), or I’ll have to get brave enough to face my fear of crawling things.

Side note: DO NOT Google “huge spider” if you want to sleep this week.