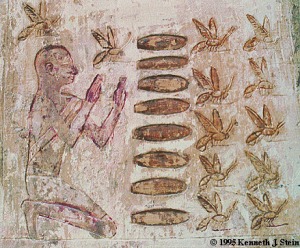 I will join a several thousand-year-old tradition, and thereby become a badass

Dad has decided he wants to keep bees.  Naturally, I’m on board.  We’re going to catch a swarm together, put it in the hive he’s built and hopefully, eventually, harvest some honey from them.

We went to a local beekeepers’ meeting a couple weeks back, and yesterday attended a small mentoring program where we accompanied a very experienced bee keeper named Kirk who helps run the Backwards Beekeepers.  He’s hysterical.  He gives advice like, “I always put my bee suit on before going near a hive or a swarm.  That way I never wish to hell I had put on my bee suit.”  The man is a genius.

We checked on six box hives of various size, ranging from one to four stacked levels.  He loaned me the top half of a bee suit, and Dad brought me some gloves.  I felt super confident from the mid-thigh up.  I gathered and clutched the bottom of the “shirt” to keep bees from flying up into the shirt (it worked, miraculously).  We looked on while the other three attendees (more experienced than we) opened the hives and pulled out each frame to check on the bees’ progress, helpfully pointing out the various occupants of each section of comb: drone brood, larvae, honey, etc.  They pointed out drones (huge) and we got a quick peek at a queen (large, brown and sensitive to light).  Overall, super cool. 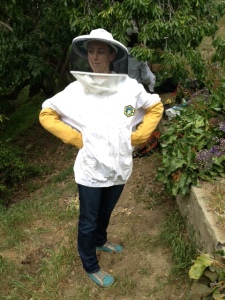 Captain Obvious says, “If you keep bees, you’ll get stung.”

I started menstruating yesterday, so I was really tired and sat down after about an hour of this.  After a minute I worried that sitting would cause the cuff of my pants to lift and allow bees to fly up my pants.  I pondered this issue, and as I tried to think of a solution that wouldn’t involve standing, I got stung on my left leg right above the knee, through my pants.  Well.  Shit.

Sitting had pressed my pants right against my skin, so there was no space to protect me from a stinger.  I brushed the bee off and quickly pulled my pants away from my leg, which extracted the stinger.  It hurt a little more than an inoculation, and kept hurting for a few minutes.  Still, I expected to be stung at some point during my beekeeping experience, so I wasn’t too dismayed. Plus, it was my first sting ever!  So I was curious to see how I would react, both psychologically (temporary pain doesn’t really bother me) and (mostly) physically.  I took a Benadryl when I got home, and took a six hour nap, lol.  I haven’t had a chance to sleep in for two weeks so I was in desperate need to some catch-up sleep, and I typically take a long nap on the first day of my menstruation cycle, so I doubt it was a symptom of an allergic reaction.  The spot where I got stung is just a small pink dot on my leg now, and it doesn’t even itch, so I think I’m ok.

Dad was super bummed that I got stung.  He kept apologizing, and Boyfriend doted on me when I got home and did work on his laptop next to me in bed until I fell asleep.  Dad kept checking on me, and called me at work this morning to see how I was doing.  So sweet.  I am so loved.  Plus, I bet he doesn’t want me getting scared off, which is understandable; he wants a beekeeping buddy 🙂  He said he’s going to get me my own beekeeping suit!  Hooray!  I’ll be so confident in my own suit!  I can’t wait!  I’m doing that thing where I get really excited about a new thing.  I almost impulse purchased this necklace on Etsy the other day, lol.

UPDATE:  Aaaaaand I bought this one instead (two of them, actually, one for Dad and one for me).  Not sure where his will go, maybe on his wall at work?  Ugh.  I am the worst/best.