Dad and I have been attempting to keep some bees for months now, and every time we think they’ll stay, their numbers peter out.  The first batch just took off, the second and third hung out for a while, but didn’t make much progress and were too small.  The fourth built a bunch of comb and then started leaving.  The most recent colony, however, has taken to the hive beautifully.  We did an inspection yesterday and saw loads of brood (mostly capped), two generations deep, meaning: The queen starts laying in the center of the comb and works her way out toward the edge of the comb.  On a few of the strips we saw capped brood at the edge of the comb (unhatched first generation babies), then empty comb (where some first generation babies had already hatched and left), then, in the center of the comb, more capped brood (where the queen had already laid another batch of babies: a second generation).  That’s our working theory, anyway. 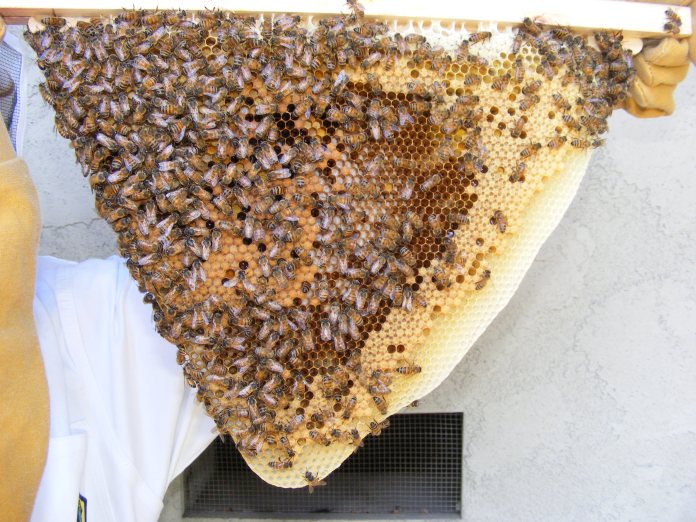 note the brood right in the center, almost ready to be capped (and the capped honey at the very top)

Once their numbers are shored up, they’ll keep building comb and dedicating more comb-space to food storage (honey, pollen, and a combo of the two adorably called “bee bread”).  We saw a high concentration of bees on the edges of the comb, which probably means they’re already building the comb out, and in fact there’s already been a noticeable difference in the size of the existing comb leftover from the last swarm.  Some of the strips were downright heavy with the weight of the comb, full cells and bees milling around.  There wasn’t much honey, but we’re assuming that once their numbers go up, they’ll shift their focus a bit.  I’m sure they know what they’re doing.

We took a bunch of photos of each strip so we could inspect them carefully without disturbing the bees.  I lifted each strip out of the hive while Dad took some quick hi-res photos, and carefully replaced each strip so we wouldn’t crush any of them.  There were only maybe a dozen bees that were noticeably agitated (flying at our faces and such), which is a sign that either smoking bees really does make them more docile, or we have some very well-behaved ladies in the hive.  They stayed on the comb when we pulled each strip out, even when a stiff breeze came by.  We even saw a few bees waggling their abdomens up and down.  It didn’t look like a waggle dance, so we’re not sure what they were doing, lil’ weirdos 🙂

Afterward, while examining the photos (very thoroughly), I spotted the queen!  We knew she must be there, but it’s good to see her.  We didn’t find any drones, though.  Perhaps they were on a mating flight?  We also saw some really pretty pollen, all different colors, on the comb and on some bees’ legs: dark orange, dusty yellow and vivid yellow.

They seem like a strong colony.  I can’t wait to see how they do.  Dad’s going out of town for the week, so I’ll check on them in his absence, checking for pollen on their legs when they return to the hive, and peeking in through the window to see if they’re building more comb. 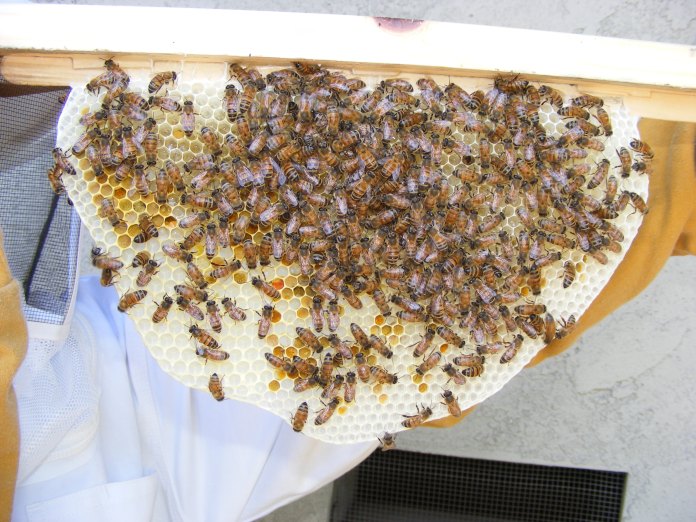