I found today a series of classic video game characters (Samus, Megaman, Link) illustrated in the style of traditional Japanese woodblock prints.  They’re so silly and cool.  Nerds are the best.  Japan is the best.  I love you, Japan.

I remember playing through the first few hours of Metroid Prime (which I need to replay, what a great game) before Diminutive Roommate told me that Samus was female.  I’ve played so many male characters, I was super excited to play a lady.  I became attached to the game, fond of it even.  It’s an old friend who made me die a lot, and freaked me out with space pirates.  Good times. 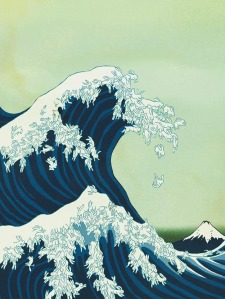 if only this were real

I just found this print at Giant Robot, and I might have to add it to our wall of quirk (The Quall).  You can actually get the Hokusai wave as a wall sticker, too, because waking up without thinking JESUS A GIANT WAVE-oh fuck wait it’s just a sticker is a wasted morning.

And check this out, he did a study with cranes.  I always love looking at studies rather than just finished pieces.  The artist puts down shapes, and finds harmonious ways to compose a larger piece.  Studies are visually whispered insights on the the artist’s process, and they speak even after the artist dies, like he’s showing us what he was considering before that one painting made him famous.  Also known as magic.