Yesterday I had adventures! 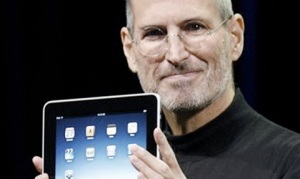 i like to think Steve Jobs would be proud

I had to drive all the way across town from where I’m now living with Boyfriend in Silverlake to my old place in Marina del Rey to give my apartment keys to Teacher Roommate, so she could hand them in today.  When I got in the elevator, I discovered a piece of gray luggage, unzipped, so I took a peek inside and found men’s clothing, some fancy cowboy boots, and an iPad.  An iPad?!  Why yes, an iPad.  I waited in the elevator for about five minutes waiting for the owner to come back and breathlessly exclaim, “Whew, it’s still here, I almost forgot my bag!”  But no.  So I took it into the apartment with me to keep it safe, at which point I got a phone call from Teacher Roommate.  “Heyyyyyy, can you help me with somethiiiiiiiiing?”  She had found herself in a typical sitom scenario after accidentally dropping her keys into the dumpster.

I took the elevator back downstairs to the garage, found an old towel to drape over the edge of the dumpster, laid a recycling bin on its side, and watched the hilarity ensue (and took pictures, of course).  Back upstairs, we spackled up some holes, I grabbed whatever I had left there, plus the mysterious luggage, and drove away.  I reached the freeway before I realized that I had forgotten to pass of my keys to Teacher Roommate.

After pulling U-boat and correcting my lapse in memory, I jumped on the freeway and managed to make it all the way downtown before encountering my next adventure: a car stopped in the right lane on the interchange between the 110-N and the 101-N.  I pulled over, followed by a bright  green Jeep.  A guy in his early/mid-twenties got out of the Jeep and said he saw someone slumped over the wheel.  “Woah!  Is he dead?” I asked, pointlessly.  We went over to investigate, and with a few loud, EXCUSE-ME-SIR’s, managed to rouse him.  The old car was still running with this old man literally asleep at the wheel.  I walked over to the driver’s side, mindful of the oncoming cars, and told the guy to put it in park, which he did (with some difficulty).  I had just told him to scoot over when floodlights lit us up from behind: the cops had arrived!

i’m gonna pretend they looked like Erik Estrada from CHiPs

They unceremoniously told me to get out of the road (and rightfully so), which I did.  They got the guy out of his car and pulled the car onto the shoulder.  I told the man to step back from the road, and sit down, which he did, like a drunk.  I gave one cop my contact info and a quick rundown of what happened (not much) while the other cop chatted with the old man.  The cop (who was CHP I think, given the khaki uniform, right?) thanked me for pulling over, and wished me a good night.

I do stuff like this all the time.  If I see a broken down car, I push it.  If someone looks lost walking around, I stop and try to help them.  When I see a kitten, bleeding to death in the road, I rescue it and nurse it back to health.  Helping people (and kittens, apparently, but that’s new), makes me feel awesome.  It makes the day worth while, no matter what else has happened.

And THAT is why I am a Professional Citizen 🙂

UPDATE: I found the owner of the iPad’s phone number in his email signature when I attempted to email myself from the iPad so I could contact him somehow.  I left him a message last night before going to bed, and got a call back today!  He said thanks, and we’re still figuring out when he can come by to pick up his bag of stuff.

And just for the record, this is still going to happen.