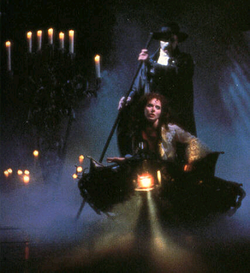 I had the inexplicable urge to see The Phantom of the Opera today.  I had such a craving to hear “Think of Me” that I found it on YouTube and played it at my desk at work.  I’m listening to it right now.  What a voice.  Holy shit.

I saw the play when it was at the Ahmanson Theater downtown as a child.  Of course I remember the part where the chandelier goes over the audience, but more vividly I recall when the phantom loses his mask, and the woman he has captured picks it up and offers it to him.  I was struck by her kindness in the face of his… well, obvious lunacy (and, let’s be honest, hideousness).  I recall the moment with perfect clarity; her extending the mask to him with her right hand in a pale, overflowing gown, him crouched on the floor, hiding his face in shame.

It’s playing in Las Vegas.  I might have to make a weekend out of it (if I had a weekend).  MIGHT HAVE TO QUIT KARATE JOB ANOTHER WEEK EARLY MUAHAHAHA.