I set up a shelf from Ikea (which didn’t come with any way to attach it to the wall, so Home Depot to the rescue), and finally set out all my little chotchkies and what’s-its. 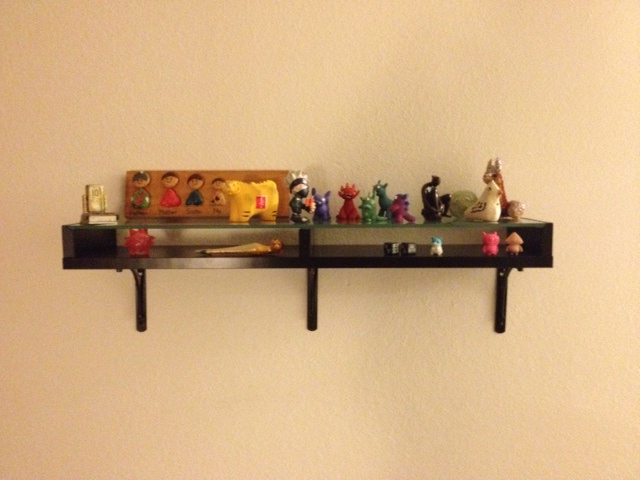 I like to think Kakashi is reading aloud to the Beastlies, and they are just horrified.  A bunch of this stuff (see bottom right portion) is odd little stuff my dad threw in my stocking this past Xmas.  What a weirdo.

Let’s identify all these little items, starting at the far left.

-Calendar which, when turned toward the operator, changes number up to 31, then starts over
-Clay representation of my family made in May of 1990 (kindergarten)
-Clay tiger with a Kanji character on its side, given to me by a British photographer who took some black and white photos of me a few times
-Plastic figurine of Hatake Kakashi from Naruto.  What a dreamboat.
-Beastlies!  All unique.
-Bronze statuette of a bathing woman; this is a miniature reproduction of a bronze statue that I really like, and a gift from my parental units.
-Jade ball within a jade ball x3; a gift from Mom’s college professor friend from China (to find me a boyfriend, if I recall), who always encouraged my writing and poetry.
-Clay bird whistle from the Apuseni Mountains in Romania.  There’s a little hole on the neck that changes the tone.
-Fox Xmas ornament, but I’ve never hung it on a tree after the first year Diminutive Roommate gave it to me.
Bottom shelf: all random items from my Xmas stocking this past year, except for the cheetah pen next to the pink ball (which lights up when struck), which was a gift from Teacher Roommate all the way from Barcelona, Spain.  She also brought back some earrings for me and Diminutive Roommate.

So… this is embarrassing to admit, but there have been several times when I have the feeling that if a cartoon character were to come to life, I would totally hit on him. I’m not talking about a common cartoon crush or whatever. I mean… crap, what do I mean…?
It must be the whole package I’m drawn to; the environment the character is in, the simplicity of the rules, and so on. No homeless people, no menstruating, no bad haircuts, none of that crap. This must be what it’s like to have a crush on a celebrity after watching a movie.
And so, without further ado, before I blush myself into oblivion, my list of cartoon dudes I would seduce the shit out of were I given two dimensions of a chance (and the show/movie they’re featured in):

Hatake Kakashi (Naruto)- I’ll never be cool enough for this guy. Boys and girls all over Japan agree: Kakashi is the coolest. Also, a pervert.

Vash the Stampede (Trigun)- Vash is so broken and innocent. I want to take care of him. Among other things.

Spike (Cowboy Beebop)- He’s the best at what he does. His intelligence and physical skill make him a highly desirable mate. What? I’m just saying…

Ashitaka (Princess Mononoke)- What can I say about this guy? He’s the outdoorsy type, the prince of his clan, he’s quick, courageous, animals trust him, and he’s voiced by Dr. Manhattan (that last part doesn’t actually do anything for me. Trivia!)

Needless to say all of these characters are a bit damaged, because who wants a man without a past? Not me, sister. They’re also drawn with special attention, none of that HUGE ANIME EYES baloney. Don’t get me wrong, their hair is all ridiculous, but that’s how anime distinguishes one character from another. I’m over it.